KBBI and Bluejaye Productions proudly present Knife Skills, an original piece written by Lindsey Schneider and produced with local talent now available for on demand listening. Knife Skills is the story of four kitchen workers at the edge of the world. A charming executive chef, an ambitious sous chef, a hardened line cook, and an innocent dishwasher form a strong friendship working long hours at a rural deluxe wilderness lodge in Lake Clark National Park, Alaska. Surrounded by incredible wilderness, the kitchen crew prepares high-end cuisine for the über-rich clientele who come to enjoy luxury recreation at Susitna Lodge. When a prestigious group of Belgian royals visits the lodge, owner John lets sous chef Margo take the reins in the kitchen–but when she accidentally discovers her executive chef’s biggest secret, she must choose between her ambition and her friendships before they both disintegrate. Touching on themes of ambition, sexism, and betrayal, Knife Skills is the untold drama of working in the bush.

Written and Directed by Lindsey Schneider

Produced for KBBI AM 890 by Josh Krohn

In order of appearance:

Andy, the executive chef: Val Shepard- credited in this recording as "Peter"

John, the lodge’s co-owner and husband of Christina: Darrel Oliver 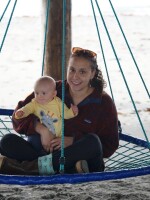 Loren Barrett
Loren graduated with honors from University of Montana and has an MA in International Development and Social Change from Clark University in Massachussetts. She served two years in Guyana with Unites States Peace Corps. Loren has a strong background in community development, marketing, and non-profit management. Loren and her family recently realized the dream of moving to Homer and now happily spend their time exploring the wilds of their new backyard.
See stories by Loren Barrett
Current Underwriters
View Our Supporters!
Are you ready for a story?
KBBI is happy to present Storytime Anytime! Tune in at your leisure to the three book series My Father's Dragon by Ruth Stiles Gannett and read by Claudia Haines from the Homer Public Library.
Start Listening!
Your Input
KBBI’s Community Advisory Board (CAB) seeks your input on our programming and community engagement activities. Email them at cab@kbbi.org.
More Information About CAB
Related Content