‘We’re all here for something similar, but so very different:’ Hundreds gather for Homer’s Burning Basket

On a brisk Sunday evening at Homer’s Mariner Park, hundreds of people gathered around a woven basket almost the size of a car and watched as the result of weeks of collaboration and creativity burned to the ground.

The Burning Basket event was part of an annual interactive and impermanent art experience to help the community manifest their intentions and let go of burdens.

This year, the 15-foot-tall basket was centered around the theme “breathe.”

“So many of you have said to me that you appreciate the theme this year, because we feel like we’ve been holding our breath,” said Mavis Muller, the lead artist and organizer of the event. “Now, we’ve come together as a community to breathe together and celebrate the 19th year of Burning Basket.”

A group of community members worked for days building the basket with Muller on the Homer Spit. They wove together grass and wood to create the giant sculpture, and people were invited to add their own touch.

Following a long-standing tradition, students from Fireweed Academy, a local elementary school, came to attach local plants, flowers and handwritten notes to the basket, with the intention of letting go.

“The elementary school students and their teachers worked on a walking path that is accessible alongside the basket,” Muller said. “Then they came along and playfully decorated it with little tripod sculptures, and they browsed around on the beach, finding shells and combs and feathers.”

Muller has done dozens of basket burnings throughout the world. But Homer’s home.

She said during build week each year, since the event started in the early 2000s, the longest-term volunteer, Florence Penrod, has come to help and share homemade chocolate chip cookies. The now 99-year-old even stopped by this year to check in on the build.

Muller said she never knows who will be there on the first day of build week. Long-time helpers, as well as complete strangers, come to help out. Even tourists that notice the basket frame from the beach will approach with curiosity and leave hours later after assisting with the efforts.

“The ‘who’ part of the build team is unknown until building starts,” she said. “So there are those who have participated over the years, four to five long-standing participants, who bring prior experience into the project, which is wonderful. But as is typical, there are participants who show up and know very little coming in, but [who are] very capable.”

After build week, it’s time for the burn.

Muller said whether it’s at the burn, or days later, she hopes people have a sense of relief and unburdening after experiencing the basket’s fiery release.

On Sunday, longtime community members and visitors alike showed up, each with a unique purpose, according to Becky King, who’s lived with her family in Homer for just about a year.

“I think part of the magic is we’re all here for something similar, but so very different,” she said. “When I went to write my intention, somebody stood right next to me and wrote theirs, and I realized I had no idea what they were writing. It was probably totally different from mine, and I had no connection to it, but it's still really powerful that we're here for the same idea.”

King and her husband, Tony Perelli, both put notes in the basket. King said hers was to celebrate the life of her aunt who recently passed. Perelli chose to keep his note to himself.

“If I write something in my journal, I can always go back and find it. But I couldn’t tell you exactly what I wrote in what is now a bunch of ash,” King said. “There’s something very powerful about that. I know the meaning behind it, because it’s important to me right now, but it’s gone.”

“I think there’s something special about impermanence,” Perelli added. “We’re all impermanent, you know? And I’m inspired when the community comes together to make a handmade thing like this thing that was on the beach, which was beautiful. And we're all letting it go together.”

Savannah Wilmarth has been in the community for even less time – she just moved here this spring – and she’s also at the Spit to let go. She said she wrote a note to release any fear and make room for the new in her new home of Homer.

“It makes me feel excitement and a connection with the community,” Wilmarth said. “It makes everyone look inward, and it brings us all together. I see everyone here that I recognize. I don’t know many people yet, but everyone’s here.”

Aidan McMurrer is part of a group of road construction flaggers, and will soon be leaving Homer. He attended the burning as a final homage to the town and his time here, before he embarks on his next journey.

“I think this is kind of a cool way to close out some of our time in Homer and wrap things up nice and neatly,” McMurrer said. “I said that before I left, I wanted to give Alaska a nice warm hug. So this is a cool way to do that.” 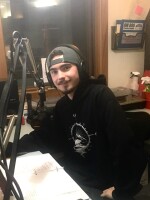 Simon Lopez
Simon Lopez is a long time listener of KBBI Homer. He values Kachemak Bay’s beauty and its overall health. Simon is community oriented and enjoys being involved in building and maintaining an informed and proactive community.
See stories by Simon Lopez
Current Underwriters
View Our Supporters!
KBBI seeks musicians for 2023 Concert on the Lawn
KBBI is seeking performers for the 2023 Concert on the Lawn. Interested performers can click the link below for instructions on how to get involved.
Interested in Performing?
Related Content