The City of Homer released its most recent Water Quality Test Results last week, outlining the results for the municipal drinking water system. Of the contaminants tested for based on state and federal requirements, nothing was reported outside of acceptable levels. Here’s the Superintendent for Public Works, Todd Cook:

"The one that is it's not at a critical level, but we have seen over time and we're talking like 10 10 15 years 10 years 12 years. We have seen what's called total haloacetic acids Trend up a little bit," Cook said.

Halo acetic acids are a byproduct of disinfectants including chlorine reacting with naturally occurring organic and unorganic matter present in source water. The city conducted a study last year to identify issues for particulate removal and optimal chemical usage.

"We did have a study done last year where we called Dow engineering. They came on site worked with our guys. I did a bunch of lab work to try and determine our Optimum chemical dosing for removing particulate from the raw water. And also to determine if we were using the best chemical for our raw water and for our application and what they determine was we are using the best chemical we can and that the operators are running things about as good as they can what we got out of the study was some additional monitoring that we were not doing previously which is helping us to dial in those chemicals and to really kind of level out those readings make them more reliable and hopefully keep this under control for another 15 or 20 years," Cook said.

The city is required by the Environmental Protection Agency to provide potable drinking water through the municipal system, and operators are required to be certified by the state, and go through continuing education to stay up to date with current regulations. Public Works has four operators maintaining the system in Homer:

"And all of our guys are certified with the state of Alaska to treat drinking water. Our treatment plant is certified at one of the highest levels in the state. And so we have four operators two of them are a level four, which is the highest level you can attain in the state of Alaska one is level three working on four and one is a fairly new operator. He's been with us for a while, but he just transferred the treatment operations and he is working on his level two," Cook said.

Other projects at public works is mitigating earthquake hazards and replacing older pipes running from the reservoir. The water line running from the storage tanks into town are also older pipes, and the city is finding funds to replace them before they fail. On the sewer side of their operation, there are two lift stations that move waste from the spit to Ocean Drive, and from Ocean drive side of the slough to the treatment plant, one of which will need updates in the future.

"We have a lift station that needs some attention but it is not failed yet our crew go out and they clean regularly and they inspect regularly are infrastructure and we have been seeing a little deterioration and and want to live stations, but it's we're not at a critical stage yet," Cook said.

Public Works offers tours of their facilities to the public, school groups, and other interested parties. If you have questions about this year’s water quality report or about public works projects or operations, you can call Public Works at 907-235-3170. 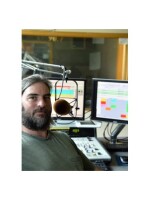 Josh Krohn
Josh is a graduate of the University of Nebraska with a degree in communications and broadcasting, and a Certified Audio Engineer through the Society of Broadcast Engineers. At 13, he got his first taste for public radio when he interned at KBBI, an experience that shaped his career. Josh returns to Homer after twelve years with Classical 90.7 KVNO, in Omaha, Nebraska, where he was senior audio engineer and production coordinator. Previously he was station manager/general manager of KUHB-FM, St. Paul, Alaska, in the Pribilof Islands.
See stories by Josh Krohn
Current Underwriters
View Our Supporters!
Donate Today!