Back to Bristol Bay project

This past weekend, a crew assembled to raise the sail on a traditionally restored Bristol Bay double-ender.

The boat was part of the Fourth of July parade in Homer but the plan is to sail it back to Bristol Bay where it served as salmon gillnetter in the early 1900s.

The crew of the Back to the Bay project is rigging a wooden double-ender with a spritsail in Nomar's parking lot on Pioneer Avenue in Homer. Bumpo Bremiker is splicing line to make loops to hold the rings that will secure the sail while Dave Seaman explains.

"...splicing up some eye splices in the sheet attachment point on the sail. John Breiby, a nautical historian on Alaska wrote a little pamphlet called Rigging the Bristol Bay Double-ender.  We've approximated the best we can," said Seaman.

This year the boat is on a trailer, preparing to sail down Homer's Fourth of July Parade route.
Next year they hope to put out from Homer harbor, travel under sail -  west across Cook Inlet to Williamsport. Then, they'll take the 26 mile portage to Iliamna Lake, sail the lake and the Kvichak River, visiting a series of villages on the way to their destination, Fishtival 2022 in Naknek.

The trip should take about two weeks.

The route covers about 200 miles. Tim Troll is working to restore the boat. He's also the Executive Director of the Bristol Bay Heritage Land Trust, a sponsor of the project.

"There are really only three of these that I know of. So, there's one at the Wooden Boat Center in Seattle. There is one they're restoring in Blaine, but they have so totally had to replace so much wood on them that they're virtually new boats," Troll said.

That isn't the case on this boat -  a 29-foot long wooden double-ender with a 9-foot beam and a 23-foot mast. It's made of yellow cedar planks with ribs of white oak. Seaman said the boat was converted for engine power back in the fifties. By the time Seaman got the boat, the conversion had been taken out and the boat put back to original specifications.

" They had the centerboards taken out, they had a cuddy cabin, plywood on the bow and they had engines mounted way up forward. And when this boat got to Homer, they put the centerboard back in. It's beautiful work.  It's a "spirit of tradition" boat. It's not absolutely perfect to the day, but it's as much as we could make it," Seaman said.

Painted on the bow is  "L. McN & L."  That stands for Libby, McNeil, Libby , the cannery where these double enders were commissioned and sold. From the late 1800 to the mid 1950s, these sailboats carried two fishermen, setting and hauling salmon to the Libby cannery. Troll reads from his book, a history of fishing in Bristol Bay.

" ...many fishermen referred to them as barnacle boxes.  However, they were marvelous for packing a big load of fish. I've seen 3000 fish that average close to six pounds each, come out of a Packer's boat."   And that was Al Andre. You know Al used to live here," said Troll.

Dave Seaman bought it about ten years ago and started restoring.

" I had my eye on this boat from Dan VerHusen. Dan rescued it from Bear Cove. It had fallen off it's grid and punched a hole in its side," said Seaman.

To rig the sail, the mast comes down, the sail is set and the sprit rigged. The sail is a spritsail - four-sided sail that is supported by the mast at its highest point and by a diagonally running spar known as the sprit. The foot of the sail is secured to a boom.

Post parade, the mast comes down, the vessel goes back to the shop and work continues for another year.

The original target for launch was July 5 of 2020 but pandemic lockdowns and mitigation measures warranted a change of plans. There is practically no end to the time and money that a wooden boat, almost a hundred years old, can demand to remain seaworthy. To help fund the project Bristol Bay Heritage Land Trust is taking donations, and Nomar is selling branded shirts, Tim Troll's book, Sailing for Salmon: The Early Years of Commercial Fishing in Alaska's Bristol Bay, and they're fundraising by selling traditional white Bristol Bay fishing caps. 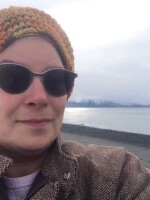