Eggs are in short supply in Homer, but the impacts of avian influenza go beyond the grocery store

Last week, the refrigerated egg section of Homer’s Save-U-More grocery store was lit, but completely bare. Sitting in the deli, manager Mark Hemstreet described a situation that is becoming familiar around Alaska — there simply aren’t any eggs. It’s the result of a nationwide outbreak of avian influenza.

Cases began surfacing in the United States in March of last year, and have since impacted nearly every state. Over 52 million domestic birds have died or been culled to try and stem the spread of this highly contagious strain, known as H5N1.

There are many different strains of avian influenza, which experts categorize as either low or highly pathogenic, reflecting the severity of symptoms. A low pathogenic avian flu virus generally causes mild to no symptoms, while highly pathogenic strains can cause severe illness and death — especially in domestic poultry.

Hemstreet said Save-U-More’s two main egg suppliers are Costco and SuperValu. Both companies primarily source their eggs from Washington State, which saw an uptick in highly pathogenic avian flu cases in December and January, straining supply chains. The disease has impacted both small backyard flocks and commercial-scale operations like Oakdell Egg Farms, which recently had to cull more than a million birds.

Like many stores around Alaska, Costco has restricted the number of eggs shoppers can purchase — when they are even available to purchase. Hemstreet said Save-U-More can only buy a limited number of cartons, same as any other customer.

“We used to get about a pallet, four or five feet high, of eggs three times a week. And now [all] they'll give us — if they're available — is two packages of each variety,” he said.

When they are able to order eggs, Hemstreet said the costs have gone up too. “The SuperValu supplier has increased their costs, so we've had to match it here.”

Nationally, egg prices have gone up 60%.

Amber Betts, spokesperson for the Washington State Department of Agriculture, said farmers have learned a lot since the 2014-2015 outbreak of avian flu, the last major epidemic in American poultry. Betts said those cases were often sparked by contaminated equipment or people moving between infected farms.

This time, the main way the H5N1 virus is spreading in Washington is through interactions with wild birds, which can carry the virus without showing symptoms. That makes the disease incredibly hard to control, Betts said.

Currently, Washington is reporting new incidents every couple of weeks, down from several a day at its peak last summer. But that offers little consolation for those who have had to euthanize their flocks.

One of the best ways to protect birds is to keep them indoors, which can be a costly challenge for farmers, and uncomfortable for the poultry. H5N1 is highly contagious, and can spread through exposure to infected surfaces, as well as through things like ponds and food sources that might be shared with wild bird species.

That has major implications for Alaska. State Veterinarian Bob Gerlach said that there have only been five flocks reported as infected so far, but added that this is “probably a long-term problem that we're going to be dealing with.”

With the seasonal migration of millions of wild birds just around the corner, Gerlach said a collaboration of state and federal agencies are watching to see how avian influenza is behaving in the Lower 48 and South America.

“There's a lot of these high pathogen influenzas out there,” Gerlach said. “Wild birds are just one of the transport mechanisms, and they're the ones that we don't have any control of.”

While Alaskan poultry haven’t yet been widely impacted, the state has tracked infections and mortality in shorebirds and raptors from the Southeast to the North Slope. Birds are more susceptible to avian influenza when under strain from other factors. Climate change is altering the timing of food availability for some migrating birds, making understanding environmental stressors along their difficult journeys even more important.

Avian flu is just one pathogen that migrating birds can carry, and a warming Arctic is increasing the risk that other parasites, like Asian longhorn and moose winter ticks, could find a hold in Alaska, Gerlach added.

The idea that scientific research should look at the impacts of specific events — like outbreaks of avian flu — on an ecosystem-level, is slowly taking hold.

Falk Huettmann, professor of wildlife ecology at the University of Alaska Fairbanks, said a big-picture approach is an absolute necessity. In his opinion, focusing primarily on mortality in poultry leaves glaring gaps in understanding how and why avian flu outbreaks occur.

“You need ecological perspectives and [to] include climate change in this,” he said. Without that, you’re missing “80 percent” of the avian influenza picture, he added.

Since wild birds can carry multiple pathogens without necessarily showing symptoms, Huettmann said that it’s incredibly difficult to pinpoint or forecast how strains of avian flu may mutate or become highly pathogenic.

“In terms of these mutations, nobody knows when they happen. It's like a time bomb,” Huettmann said.

He explained that even seemingly unrelated things like stress from climate change or environmental contamination like heavy metals could alter how seriously avian flu impacts birds.

Even the term “avian flu” is an oversimplification for a disease that can infect many different species, he said. Researchers, for example, have found low pathogenic avian influenza in animals ranging from farmyard horses and pigs to seals and whales. In Alaska and Montana, even bears have recently tested positive for H5N1.

That jump into mammals is something researchers are paying close attention to. In early January, a European study found a slightly mutated strain of H5N1 on a mink farm in Spain, which researchers suspect came from interactions with wild birds. World virologists are concerned because the virus has acquired a novel mutation that allows it to readily spread from mammal to mammal. This mutation is a concerning change because it makes it more likely that human to human transmission could occur in the future.

With migratory birds winging their way to Alaska from all over the world this spring, State Veterinarian Bob Gerlach said it’s important for people to be cognizant of avian influenza. Hunters and wildlife enthusiasts can report strange bird behavior or dead birds to U.S. Fish and Wildlife. People with poultry should be conscious of keeping feed and water sources inside, and keeping up with notifications from the state.

Gerlach cautioned Alaskans, especially those with poultry, against letting their guard down.

“We know from looking at the wild bird populations that it's not over. And it seems that there's going to be a risk come spring,” he said. 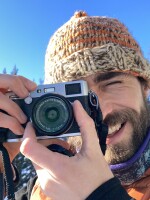 Sean McDermott
Sean is a photographer and writer originally from Minnesota, and very happy to now call Homer home. His work has been published in Scientific American, Grist, HuffPost, Undark, and Granta, among others.