Despite setbacks, Pebble Mine receives new investment of $12 million

In late July, Northern Dynasty Minerals received $12 million from a new, unnamed investor. This would seem to be an unusual time for a big investment, since the proposed Pebble Mine has faced significant setbacks recently.

In May, the EPA issued a proposed determination to prohibit the discharge of mining materials in the waters around the Pebble deposit – a decision that would effectively kill the project if it stands – and the Army Corps of Engineers’ denied Pebble’s permit in 2020. Pebble and Gov. Dunleavy are fighting to have that permit denial reversed.

And then, in July, a fire swept through the Pebble Mine supply camp. Odds seem slim that the mine breaks ground in the foreseeable future. In spite of this, the new investor has signed an agreement for even more potential investments over a two-year period, up to $60 million in total, according to Mike Westerlund, vice president of investor relations for Northern Dynasty Minerals.

Westerlund said the investor is a private asset management company and that Northern Dynasty won’t provide the investor’s name because of the treatment previous partners have faced.

“We found in the past that many of the ENGO [Environmental Non-Governmental Organization] community will use this information to wage public campaigns against our investors, which doesn't seem fair to me or reasonable even, but they try to pressure them and they try to block them, etc., and make life unpleasant for them. So we're just choosing not to release their name at this time,” he said.

Westerlund explained that Northern Dynasty wanted to raise funds without issuing equity because their stock prices are low.

But, this is just a fraction of the company’s peak price of more than $20 on February 17, 2011. Westerlund said the new investment will help “move the permitting forward.”

He added that the investor is aware of the history of public opposition against the mine and the EPA’s proposed determination released in May. They’re motivated to put money into the project anyway.

Westerlund said that with each $12 million the new investor commits, it will receive 2% of gold and 6% of silver produced over the lifetime of the mine.

Bob Loeffler is a research professor of public policy at the University of Alaska Anchorage Institute of Social and Economic Research, and his work includes studies on land and resource issues. He said the investor may believe the reward is high enough to warrant a risky investment.

“I don't know who the investor is,” Loeffler said. “I imagine that from the investor side, they're going well. The odds are quite long that the mine will win either or both their permit appeal and will prevent the EPA from vetoing any mine permit. But clearly some investor thinks the odds are non-zero. So it's a risk/reward. And the investor must believe that the reward is high enough.”

Loeffler worked for the Alaska Department of Natural Resources for over two decades. His job at UAA is funded in part by the Council of Alaska Producers, a mining trade association. Loeffler said his professional obligation is to the university, not the industry.

He said Pebble seems to be preparing for a long, expensive battle over permitting, because keeping the Pebble Mine project alive is critical for the existence of Northern Dynasty itself.

“Northern Dynasty has only one asset and that’s the Pebble Project. It's not like, you know, General Motors, which can say, well, this particular car isn’t selling, concentrate on other cars, or even a large mining company which might say, this particular prospect is becoming expensive. I'll concentrate on my other prospects. As far as I know, their only asset is the Pebble prospect. So they don't have any alternatives,” he reflected.

The EPA’s Proposed determination to nix the mine is not final. The agency held public hearings in Dillingham, Newhalen and online in June. The written comment period is open until September 6. Comments can be submitted online at regulations.gov. 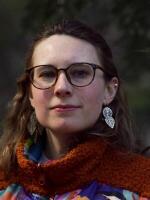 Katherine Moncure, KDLG
Katherine is covering local stories in Dillingham and the Bristol Bay area for the summer of 2022, and she's excited to be in Alaska for the first time. She's passionate about all forms of storytelling, and she recently graduated from the Salt Institute for Documentary Studies, a 15-week intensive in radio and podcast production. When not working on stories or hosting the morning news, Katherine enjoys cooking, reading, and going on aimless walks. She'll pet any dog that wants attention.
See stories by Katherine Moncure, KDLG
Current Underwriters
View Our Supporters!
Donate Today!
Related Content