Snow, rain and fluctuating temperatures drive moose out of woods.

Moose have been coming into Carla Dekle’s yard and munching on willows every winter since she moved into her home near Delta Junction back in the 1990s.

“We have several cows that always come back every winter that are pregnant, and sometimes they’ve got babies with them,” she said.

But Dekle had to deal with a much different kind of moose encounter on Monday, when an aggressive bull and cow showed up in the yard.

“They were just very, very aggressive. I have never seen this before, and I’ve lived here over 26 years,” she said.

The winter storms that pounded the Interior last month have made life difficult for both people and wildlife, especially moose. The deep snow and hard icy crust makes it difficult for moose to forage, so they’re coming out of the woods and into human-populated areas to find food and refuge. And some have become aggressive and attacked people, biologists and law enforcement officials say.

Dekle says the female charged her roommate when he went out to get some firewood. When she stepped out on to the porch a few minutes later, the moose lunged at her, too.

“She was probably 30 feet away from me at the time she charged. And she was here in it seemed like three big steps,” she said.

She says the bull then ran over and attacked a sled dog they’d tied up out in the yard.

“I’m screaming and yelling for my roommate to grab a gun, because I was not going to let him trample a dog,” she said.

Dekle says the female was right next to the porch when she flung the front door open so her roommate could get a good shot with his .41-caliber Magnum pistol.

“My roommate just started firing, because we didn’t have no choice. She was going to come through that door,” she said.

She says the female staggered and dropped, and the roommate then reloaded and killed the bull. Dekle says the trooper who came out to the house told her that moose were becoming very aggressive – because they’re starving.

“They are eating everything they can get a hold of,” she said.

Tony Hollis, a wildlife biologist with the state Fish and Game Department office in Fairbanks, said deep snow with a crust from rain in the middle is making it difficult for moose to move around and find food.

“The moose are having a hard time getting around and it’s just real stressful on them and making them ornery,” he said.

Hollis said Monday he’s been getting a lot of reports about run-ins with aggressive moose from all around the Interior.

“This morning we had 17 voicemails on the machine from the weekend, and 10 of them were moose issues,” he said.

Hollis said people should always keep an eye out for moose and stay away from them, especially now.

“People out and about just need to realize that this winter, from here on out, you could deal with an ornery moose that doesn’t want to get off the trail. And the more stressed they are, the tougher shape they’re in, the more ornery they’re going to be,” he said.

You can find the original story here. 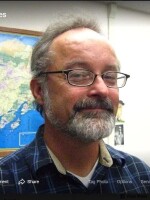 KUAC Tim Ellis
Tim Ellis has been working as a KUAC reporter/producer since 2010. He has more than 30 years experience in broadcast, print and online journalism.
See stories by KUAC Tim Ellis
Current Underwriters
View Our Supporters!
KBBI seeks musicians for 2023 Concert on the Lawn
KBBI is seeking performers for the 2023 Concert on the Lawn. Interested performers can click the link below for instructions on how to get involved.
Interested in Performing?